Getting the Facts About Liposuction

According to the American Society of Plastic Surgeons (ASPS), over 250,000 Americans underwent liposuction procedures last year—a 5% increase from 2017. Liposuction has been a staple of plastic surgery for a long time, and more people seem to learn about its power to contour the body every year. Although many people choose to get liposuction, and many more have a general idea of what it means, there are still many misconceptions about this procedure. Here are five of the most common misconceptions we hear about this procedure: 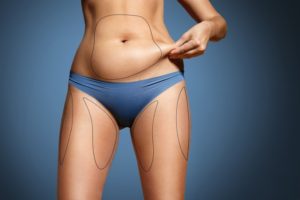 Myth 1: Liposuction is a replacement for diet & exercise.

Myth 2: Liposuction can get rid of cellulite.

Cellulite’s unique appearance is caused by subcutaneous fat pushing up against bands of tissue, impacting the appearance of the skin in undesirable ways. Liposuction can only remove pockets of fat and has no direct effect on connective tissue. This means that liposuction is not an effective treatment for the bumps and dimples characteristic of areas with cellulite.

Myth 3: The body reacts to liposuction by generating new fat cells in other areas of the body.

It’s unclear how this misconception got started, but variations on this idea have been around for a while. After liposuction, you will indeed still have fat cells in untreated areas. However, once fat cells are removed from certain areas of the body, they do not grow back, and the body doesn’t create more to compensate. After liposuction, the remaining fat cells can later expand if one’s calorie intake becomes excessive, but there’s nothing mysterious about it.

Myth 4: I will have flabby, loose skin after liposuction.

If your skin still has decent elasticity, it will most likely conform to your body’s new contours following liposuction. Again, liposuction is only meant to remove pockets of stubborn fat, so the amount of fat you lose during a liposuction procedure will not leave an enormous amount of loose skin behind. When you see people with large amounts of sagging skin from weight loss, they most likely have arrived there through diet, exercise, and/or bariatric weight-loss surgery. For people with this issue or poor skin elasticity, there are several lift techniques that can correct excess skin after massive weight loss.

Myth 5: I will NOT have flabby, loose skin after liposuction.

Liposuction does nothing whatsoever to address sagging skin. For some people, the appearance of a double chin or pronounced belly is due to excess loose skin rather than, or in addition to, extra fat. If you have loose skin going into your liposuction procedure, you will have loose skin coming out. In fact, liposuction might exacerbate the effect. Fortunately, you can combine liposuction with a skin-tightening procedure to correct sagging skin as well. One of our experienced plastic surgeons can determine whether liposuction, a lift procedure, or both would be the best solution for you.

If you’re interested in liposuction, or any of the many other plastic-surgery procedures we offer, please contact one of our Atlanta Plastic Surgery locations to schedule a consultation today. Don’t forget to follow us on Facebook and Twitter for the latest plastic surgery news and updates.

Patient Update: What Does the Recent Breast Implant Device Withdrawal Mean? How to Prepare for Plastic Surgery

What Are Some Common Cosmetic Surgeries You Might Consider for the New Year?